Mother of the rock and roll and symbol of youthful revolt… Understanding music as we know it today is not possible without knowing the path of the instrument that has praised many of the modern myths: the electric guitar. Its invention marked a before and an after, opening the way to musical genres and styles that have shaped contemporary music; but the truth is that the history of the electric guitar is relatively new: it takes us 80 years back to discover its origins… A short, but exciting trip. Will you come with us?

30’s: the history of the electric guitar begins

By looking today at great guitarists (turned into legends) like Jimi Hendrix, BB King, Steve Vai, Mark Knopfler, Eric Clapton, and so on … it’s odd to think that the origin of the history of the electric guitar is in the Hawaiian music, but it is true! At the beginning of the 20th century, jazz music became popular and appeared numerous bands and orchestras in which instruments like the piano, trumpet or saxophone eventually drown out the sound of the acoustic guitar. Hence, some musicians began to seek solutions for the guitar to sound louder. One of them was George Beauchamp.

In the late 20s, Beauchamp—along with John Dopyera—developed a guitar with a metal body and internal aluminum discs that sounded five times louder than normal and that it lent itself to the technique of the ‘slide guitar’ (consisting of sliding across the strings a glass or metal tube to achieve blue tunes), common in Blues, country, and Hawaiian music. The invention was a great success and although the company went bankrupt, it was the inspiration for Beauchamp’s further work. Finally, in 1931, he and Adolph Rickenbacker launched the ‘Frying Pan’ (for its pan shape), an electric Hawaiian guitar made entirely with metal materials and equipped with an electromagnetic pickup. It was the first electric musical instrument and the precedent for modern electric guitars. 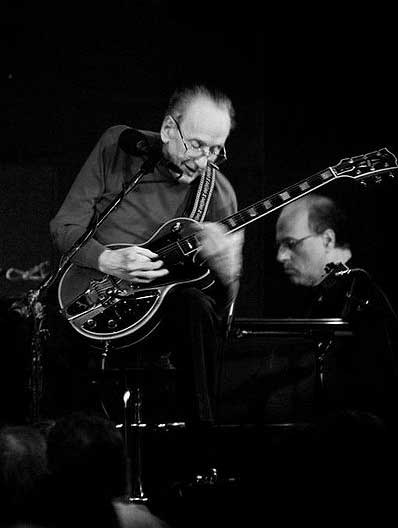 After the release of the ‘Pan’, people like Orville Gibson began to experiment with the commercialization of electric guitars models with the design of a body like the Spanish guitars. One of them was the Gibson ES150 (ES stands for ‘electric spanish’). It was marketed in 1936, obtained an immediate success, and the approval of important jazz soloists like Charlie Christian, whose performances eventually changed the history of the electric guitar and revolutionize the way musicians saw this instrument: this musical instrument had the same strength and prominence that a trumpet or a saxophone. The problem of these electric guitars? The vibration, which caused an distorted sound.

To solve this problem, around 1940, guitarist Les Paul devised a solid body guitar that he nicknamed affectionately ‘The Log’, consisting of an elongated piece of pine wood with a neck and pieces of other guitar … A little aesthetic design, but with great result: the vibrations were over.

Many people refused to commercialize Les Paul’s guitar, convinced that it would not succeed, except for Leo Fender… When you buy an electric guitar, remember him: he was definitely the one that made possible that this instrument become available for everybody!

Fender was inspired by ‘The Log’ to create a new model, the Fender Broadcaster electric guitar (later Fender Telecaster), which soon displaced other guitars: with a robust design and easy construction, it was manufactured in series, resulting in a lower cost, therefore, more affordable for the masses … This was what changed forever the history of the electric guitar.

During the 50s and 60s, the Fender Telecaster was responsible for the popularity of the electric guitar, leading to a new musical genre: the rock and roll. In fact, this model was so successful that, along with the Fender Stratocaster, is the only one that has not been discontinued to this day.

The sound chosen by Jimi Hendrix. The sound without which it would be impossible to understand contemporary music.